Volume soars 48%, non-banks continue to get support from this funding avenue

Growth rode on both, established and new originators entering the market to augment their resources profile in a challenging financing environment. The number of active originators was close to 100 in the first half of this fiscal, compared with ~70 in the corresponding period of last fiscal.

MBS volume rose 16% on-year, which is impressive given that some HFCs that were large originators last fiscal had limited transactions during the second quarter of this fiscal because of muted or negative growth in assets under management. In effect, the entry of new originators and the hunt for alternate source of funding, drove volume.

The ABS segment saw volume zooming 69%, benefitting from a doubling in vehicle loan securitisation growth, and continued expansion of the asset class base.

The volume of pass through certificates (PTCs), which remain the preferred route for ABS transactions, spurted 63% on-year. Consequently, the share of PTCs in total securitisation rose to 41% from 36% in fiscal 2019 (see annexure). Direct assignment (DA) volumes grew 39% on-year to Rs 59,000 crore.

Says Rohit Inamdar, Senior Director, CRISIL Ratings, ‘Heading into the second half of the fiscal, the prospects of the market remain strong. Expansion of the originator base and mainstreaming of non-conventional asset classes augur well for the market. A bigger boost, however, is expected from regulatory interventions.”

Among recent regulatory interventions, the Reserve Bank of India (RBI) has relaxed the guidelines on minimum holding period in securitisation transactions backed by long-tenure loans till December 31, 2019. This would ensure increased supply of eligible assets available for MBS transactions.

Says Krishnan Sitaraman, Senior Director, CRISIL Ratings, “The partial credit guarantee scheme launched by the Ministry of Finance is expected to further lift demand for securitisation from public sector banks. Many of these banks have already sanctioned loans under the scheme and disbursements are expected over the next few months.”

Securitisation transactions backed by microfinance loan receivables should get a fillip over the medium term from the expansion of the definition of microfinance borrower profile. The RBI recently announced an increase in household income limit for borrowers of NBFC-microfinance institutions from the current Rs 1 lakh for rural areas and Rs 1.60 lakh for urban/semi urban areas to Rs 1.25 lakh and Rs 2 lakh, respectively.

That said, growth in securitisation volume is not expected to hamper the market for priority sector lending certificates (PSLCs). During the first half of the fiscal 2020, PSLC transaction volume hit Rs 2.72 lakh crore, 83% of the total volume in fiscal 2019. PSLCs relating to the small and marginal farmers segment continued to be in most demand, followed by general, micro enterprises and agricultural – in that order (see annexure). Securitisation is expected to continue to be a key funding avenue for non-banks this fiscal when there have been challenges faced in other sources of resource mobilisation. 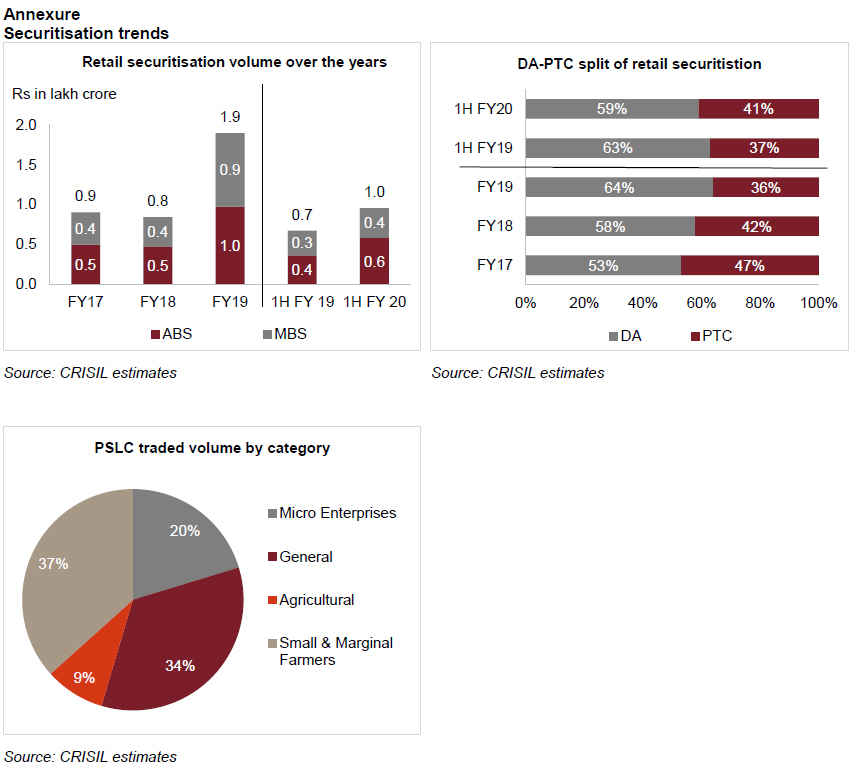