Retail lending, supported by securitisation, to remain the key driver next fiscal

The prolonged slowdown in bank lending may be bottoming out this fiscal, with gross credit offtake set to rise 8-9% on-year in fiscal 2021, a good 200-300 basis points (bps) over the likely growth of ~6% this fiscal (refer Annexure 1).

A gradual pick-up in economic activity, continuing demand for retail loans, and strong growth in lending by private sector banks should drive the uptick. Recent policy moves announced in the Union Budget, and by the Reserve Bank of India (RBI) are also expected to provide spur.

As for this fiscal, some growth momentum is expected in the fourth quarter, after a subdued three quarters – due to traditional fiscal year ending growth. RBI’s move to exempt banks from cash reserve ratio (CRR) requirement for incremental credit to certain sectors for up to five years, will also support lending. Incremental net domestic credit this fiscal up to December 2019 is just a fifth of what it was a year ago. Lending to the retail segment and non-banking financial companies (NBFCs) showed good growth, while credit to corporates (ex-NBFC) and micro, small, and medium enterprises (MSME) declined.

Our segment-wise forecasts are a mixed bag.

Retail credit should continue to grow at a healthy clip of ~16%, next year, supported by sustained demand for unsecured loans, muted business growth for non-banks as well as steady levels of pool purchases. Securitisation transactions through the direct assignment route have surged almost 40% to Rs 59,000 crore in the first half of fiscal 2020, compared with Rs 42,700 crore a year ago.

Says Krishnan Sitaraman, Senior Director, CRISIL Ratings “Structural shifts such as favourable demographics, rising propensity to leverage for personal consumption, increase in availability of financing, and reasonable risk-adjusted returns for lenders, will continue to support retail lending. Its share of total bank credit is expected to rise ~400 bps to ~28% between Mar’19 and Mar’21.”

That’s because continuing low capacity utilisation in the economy would keep private investments muted in the near to medium term, and the government’s mega-push to infrastructure will translate into credit growth only gradually. Risk aversion among lenders is also expected to remain high given the economic slowdown and bad loan issues of the past.

Credit to MSMEs, which has remained flat so far this fiscal, will receive some fillip from the RBI’s recent decision to exempt banks from CRR requirement for incremental credit to this segment, as well as the extension of the one-time restructuring scheme by one year. Overall growth in credit to MSMEs, however, is expected to remain range bound at ~5-7%.

Agricultural credit might see some uptick with the government’s ambitious lending target of Rs 15 lakh crore for fiscal 2021, up from Rs 13.5 lakh crore in fiscal 2020 (~12% higher). However, how the monsoon pans out in next fiscal will be the key.

The dichotomy in growth within banking groups will persist.

Private banks will continue to lead with ~15% credit growth, and gain further market share from public sector banks (PSBs), supported by their strong capital position and ability to raise capital. Their share is expected to rise ~400 bps by March 31, 2021, over March 31, 2019.

Says Subha Sri Narayanan, Director, CRISIL Ratings “Despite improvement in capital position and asset quality, PSBs are expected to witness slower growth due to transition and operational challenges, on account of the planned merger of 10 of them into four. But growth should bounce back over the medium term when there would be fewer, but larger and stronger banks.” 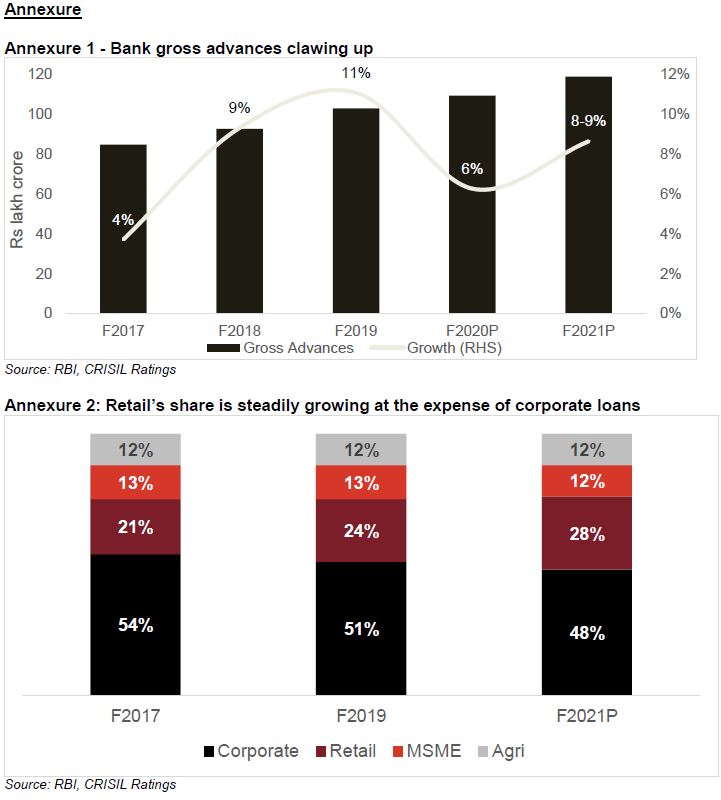