Defying general lending caution, unsecured loans1 of non-banks2 are seen growing at over 25% this fiscal, because of rising propensity for personal loans and attractive risk-adjusted returns. That would be four times faster than the 6-8% growth – a decadal low – expected in overall assets under management (AUM) of non-banks.

In five fiscals through 2019, unsecured loans logged a compound annual growth rate (CAGR) of over 30% (please refer annexure (i)).

A trifecta of constrained funding access amid rising borrowing costs, re-calibration and de-risking of loan books, and economic slowdown have impacted the business of non-banks, especially since September 2018 when liquidity convulsions began after a credit event. In spite of this, unsecured loans are doing well for three reasons:

One, there has been a structural shift in the way unsecured loans business is carried out now compared with a decade back. That’s largely attributable to the extensive use of credit bureau scores and the associated high moral obligation for the borrower to not default and incorporation of data analytics in underwriting and credit monitoring.

Two, non-banks are looking at this segment on a risk-adjusted basis to support profitability while still being cognisant of variability in credit costs. Even the NBFCs focussed on traditional segments have started tapping this segment by entering into co-lending agreements with the newer age NBFCs.

And three, non-banks have been able to maintain spreads in unsecured loans because of the lower sensitivity of borrowers to changes in interest rates. Besides, loan growth is being driven by increasing propensity to borrow.

Said Krishnan Sitaraman, Senior Director, CRISIL Ratings, “Despite the current challenging market environment, growth in unsecured loans has maintained momentum. To be sure, growth in this segment hasn’t emerged unscathed by the recent turmoil, but the impact on it has been relatively lower. Consequently, the share of unsecured loans could touch ~9% of overall AUM this fiscal-end, a jump of around 150 bps in just one fiscal.”

Such frenetic growth can also spawn asset quality worries because repayments can become highly volatile based on macro-economic and region-specific events. But as of now, delinquencies (90+ days past due, or dpd) are not yet alarming.

Delinquencies in personal and consumer durables loans are expected to inch up this fiscal but still be under 3%. In unsecured loans given to small and medium enterprises, 90+ dpd had risen from ~3.2% to ~4.5% between March 2015 and September 2019, and is expected to close out this fiscal another 50-60 bps higher. In the two- and three-wheeler loans segment, 90+ dpd had declined from ~7% at fiscal 2015-end to ~5.2% as on September 2019. But they, too, are expected to edge up 40-50 bps by this fiscal-end (please refer annexure (ii)).

Said Rahul Malik, Associate Director, CRISIL Ratings, “While the reported NPAs in these segments do not seem worrisome at this juncture, write-offs have been very high because recoveries after default are typically very low. Grossing the write-offs, the delinquencies could be higher at 6-8% depending on the asset class. But that would still be below the median peak levels of ~12% levels seen in fiscal 2010, post the economic slowdown of 2008-2010. Nevertheless, asset quality is susceptible to sudden shocks and adequacy of internal underwriting models will only be demonstrated over a period of time.”

The delinquencies notwithstanding, non-banks and borrowers alike seem to have attained a degree of ease with regards to dealing in unsecured loans. While sustenance in this segment will be driven by control over operating costs and credit costs, strong capitalisation levels would be key to provide adequate buffers for any potential asset-side risks. 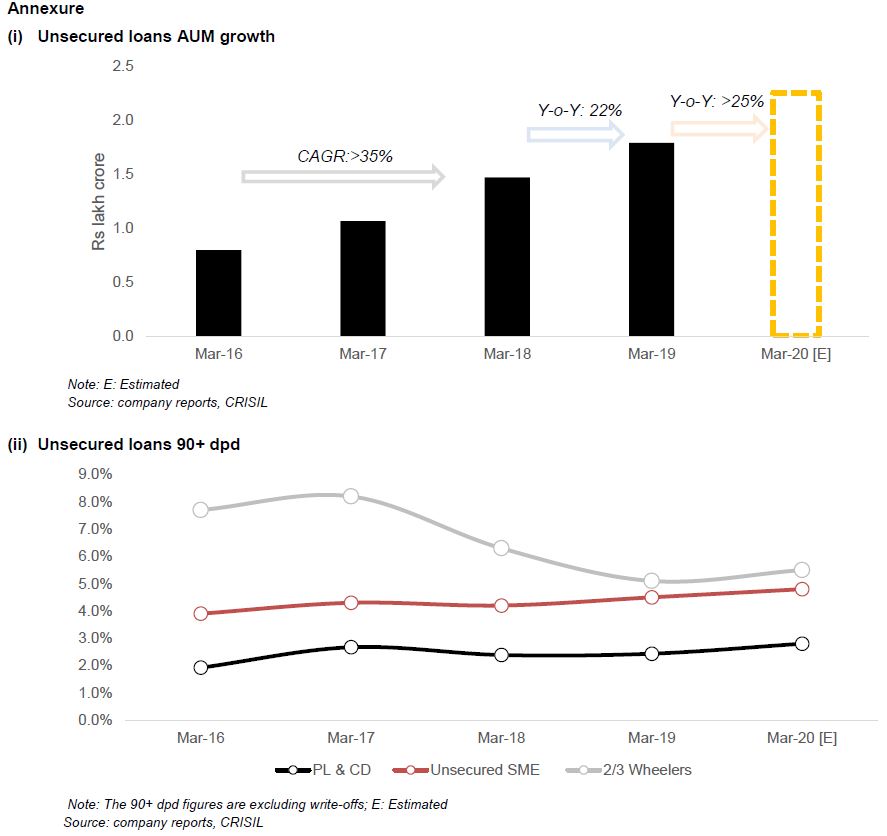