The viability of Rs 50,000 crore capital expenditure planned in the city gas distribution (CGD) space over the next four years has improved with the price of liquefied natural gas (LNG) expected to be subdued during the period. LNG accounts for nearly half of CGD consumption volume and a lower price augurs well for both volumes and operating margins of distributors, and consequently, project returns.

Spot prices of LNG have more than halved on-year to a decadal low of less than $3 per million metric British thermal units (mmBtu) in February 2020 because of oversupply and more recently, the Coronavirus outbreak.

That has sharply improved the competitiveness of piped natural gas (PNG) compared with furnace oil, liquefied petroleum gas (LPG) and gasoline, prices of which are typically linked to crude oil.

Says Manish Gupta, Senior Director, CRISIL Ratings, “At a Brent crude price of $55 per barrel, the landed cost of furnace oil would be about $12 per mmBtu, while Industrial LPG will be about $16 per mmBtu. On the other hand, industrial piped natural gas, apart from being cleaner, is significantly cheaper at $10.5 per mmBtu.”

Global LNG prices are seen softer over the medium term because supply is on course to exceed demand growth, with liquefaction capacity of about 180 million tonne – equal to 40% of current world capacity – set to be commissioned over the next 4-5 years. Domestically, regasification capacity, too, is expected to witness robust growth, outpacing LNG demand.

The domestic administered price mechanism-based gas, which accounts for the balance half of CGD volume, is also expected to benefit from low international (benchmark) natural gas prices. Typically, CGD companies pass on lower inputs costs to their compressed natural gas (CNG) and retail customers, and in return, they get a volume fillip owing to better price competitiveness.

The subdued outlook for LNG prices improves the viability of Rs 50,000 crore of CGD capex relating to the ninth and tenth rounds of auctions by the Petroleum and Natural Gas Regulatory Board (PNGRB). It also improves the prospects for 44 new geographical areas (GAs) set to be awarded in the upcoming 11th round of auctions.

These projects entail milestones for minimum work programmes with penalty clauses in the latest auctions. However, project risks are relatively low given players’ strong parentage (about 70% of capex is by oil marketing companies and strong corporate groups), the staggered nature of capex, and a favourable demand outlook. Additionally, funding risk is mitigated by improved viability and strong parentage of most players. 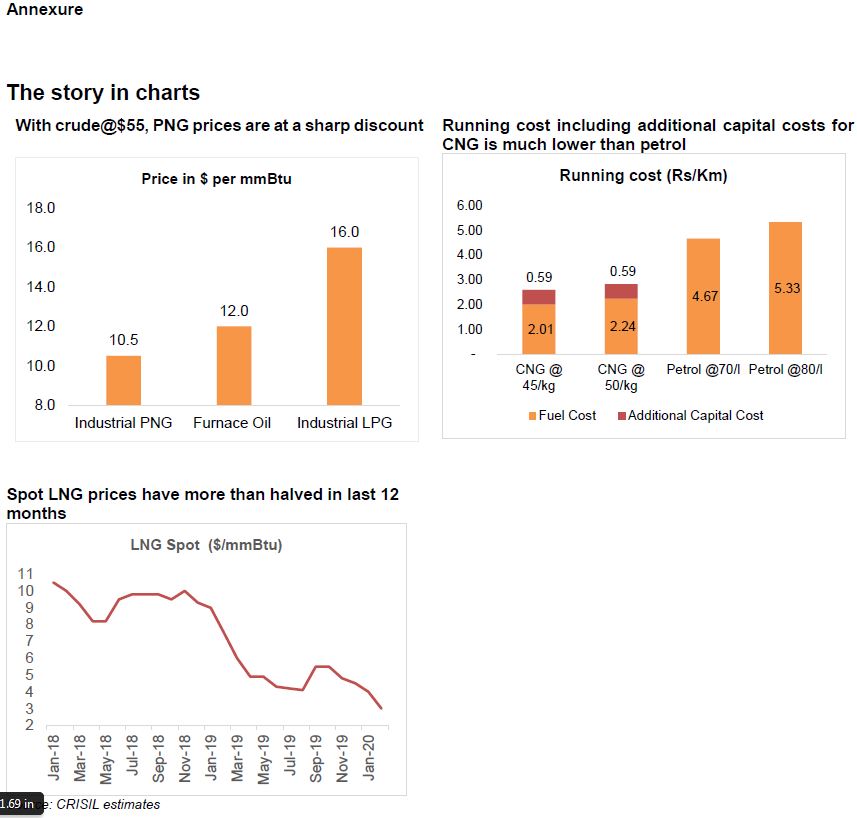